Statement of President M. Rajoy on the situation on Catalonia

As you are aware, Spain is a democratic State under the rule of law. And as it has shown in recent days and, in particular, today, it has the mechanisms and instruments necessary to prevent those that wish to violate the basic rules of our democracy from doing so. It has the mechanisms to defend legality and also to hold accountable those who are seriously endangering the co-existence of all Spaniards in such an imprudent manner.

A few days ago I said to you that the rule of law would not fail and that nobody would waver in upholding their duty. I referred then, as I do now, to the Government of the Nation and also to all those that guarantee the correct functioning of our democratic institutions. I am referring to the law enforcement agencies, to the public prosecutors, to the judges and the courts. We all acknowledge their work. They defend the rights of all Spaniards, including the Catalans, against those who wish to abolish out. They protect the freedoms of our people and ensure the law is upheld as the best guarantee of the people of Spain living freely together.

Laws are not the arbitrary imposition of a power alien to the people, far from it. Laws are the instruments we have created to live together in liberty and to cater for our differences in a peaceful and fair manner. That is why no-one can try and put themselves above the law. And that is why disobedience of the law by a public power is anti-democratic. This amounts to an imposition, an injustice, an action that infringes on the rights of the people and an attack on the very basis of our co-existence.

As all the judicial associations in Spain pointed out recently, disobedience that disparages those legal rules protecting political dissent is a totalitarian action.

This referendum was approved on 6 September in the Regional Parliament of Catalonia, violating the most basic parliamentary rules, suppressing the opposition groups and ignoring the warnings on its legality proffered by the very institutions of Catalonia. Since the outset this has been radically anti-democratic. The aspiration is to repeal the Spanish Constitution and the very Statute of Autonomy of Catalonia through the back door, without having sufficient votes to achieve that and by by-passing the mechanisms provided by law in both cases.

It is true that the fact of voting constitutes the most expressive and clearest image of democracy, but we also know that over the course of history, many undemocratic regimes have used voting to try to acquire legitimacy. Voting is only synonymous with democracy when it is employed in accordance with the law and with respect for the rights of all involved. You cannot vote to break the law; you can vote to change it through lawful means.

Nor is it democratic to vote to impose an exclusionary project upon all the citizens of a country. In a democracy, you vote to take decisions in an inclusive manner, listening to and respecting the plurality of society.

I wanted to digress a little on these reflections because the comprehensive response offered by our rule of law to this pro-independence challenge is based on them. What is at stake is not a political demand that has its channels for expression and for its defense; what is at stake is the very foundation of democracy.

Our rule of law has acted and will continue to do so. Each illegal action and each violation will have its response, which will be firm, proportional and strict.

I wish to also stress that the government will ensure that no citizen of Catalonia will be prejudiced by this radical deviation. We will ensure that nobody suffers the consequences of these events at work, in their companies or in their lives. As I said on another occasion, the law protects them and the State will respond at the pace set by its own legal system and the democratic guarantees provided for therein.

I also wish to thank those political forces that appreciate that this is the time to protect the nation and not endanger it for their collaboration and support. I do not see their attitude as support for the government, but rather as a commitment to Spain, to democracy and to the people of Spain as a whole This unity is essential and it is the best support we can offer to the mayors, councillors, public servants and local police officers in Catalonia who are being threatened, insulted and harassed merely for refusing to break the law. By coercing them, the whole of society that is respectful of the laws of co-existence is being coerced. I would like to reiterate, here and now, my recognition of them and remind them that theirs is a just cause.

Similarly, I would warn those who wish to take advantage of the pro-independence gambit to stir up instability in the streets and seek to weaken out institutions, that they will be held accountable to the Spanish people for their disloyalty at such a decisive moment in our political history.

To those in charge of the Regional Government of Catalonia who are together heading up this challenge to our way of life, I would call on them to stop their illegal actions, and abandon their futile goals. They know that this referendum cannot be held. It was never legal or legitimate; now it is no more than a pipedream or, worse still, the excuse that some would seek to further exacerbate the rift they have forged in Catalan society. If they are at all concerned by the peace of the majority of the people of Catalonia, they should renounce, once and for all, this escalation of radicalism and disobedience. They still have time to avoid a worse outcome. No-one can benefit from this tension or from this climate of disobedience or indeed this constant challenge to justice and the law.

In a democracy, there are always channels to defend any political position. Some time back, I invited the President of the Regional Government of Catalonia to set out his claims in the Lower House of Parliament, and also to take part in the negotiations on the reform of the regional financing model and I have always been willing to look for solutions to the problems of the Regional Government of Catalonia. I have always expressed my interest in listening and talking whilst respecting the law and showing loyalty to our rule of law. Our disposition to talk is always couched within this framework.

I repeat: do not proceed, you have no legitimacy to do so, return to the law and to democracy, allow the people to move on from these dark days. Do not create more problems for them than you have already created. Leave the people of Catalonia to live in peace, without division, without pressure, without dispute and without fear.

This illegal and divisive project has no future or place in a democratic State under the rule of law, such as ours. It lacks any international support, any legal backing and, above all, it lacks the support of the majority of the people of Catalonia.

I will end now. In the same way as I can guarantee you my determination in ensuring that the law is upheld without renouncing any of the instruments available under our rule of law, I can also assure you that my actions will be guided at all times by prudence and responsibility in avoiding that the senselessness of a few will have to be borne by all the citizens of Catalonia and the rest of the people of Spain.

Thank you very much. 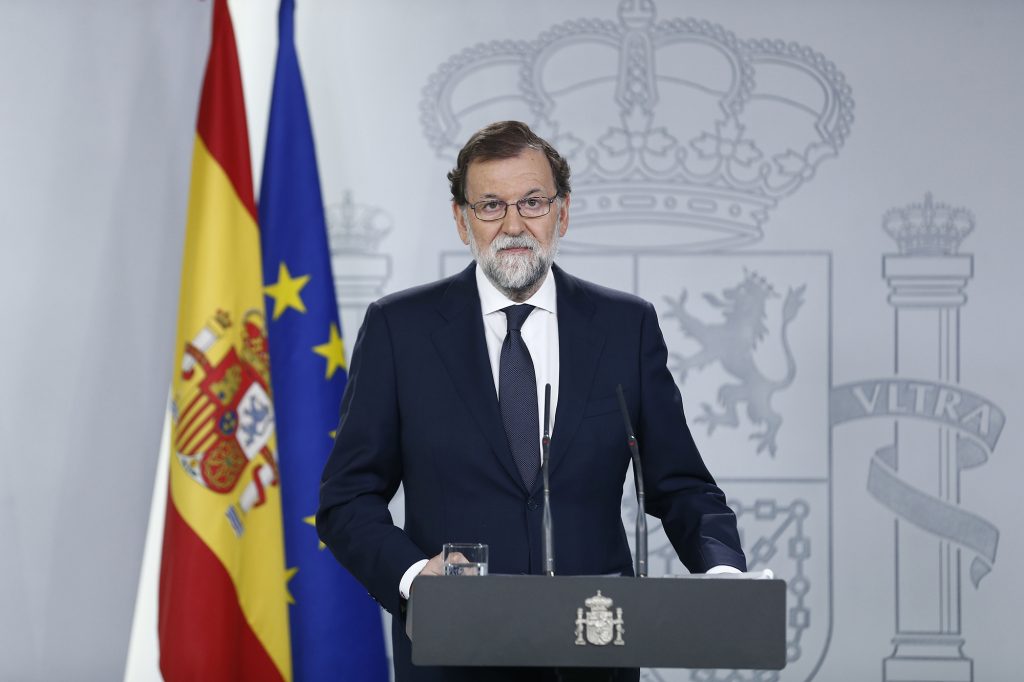